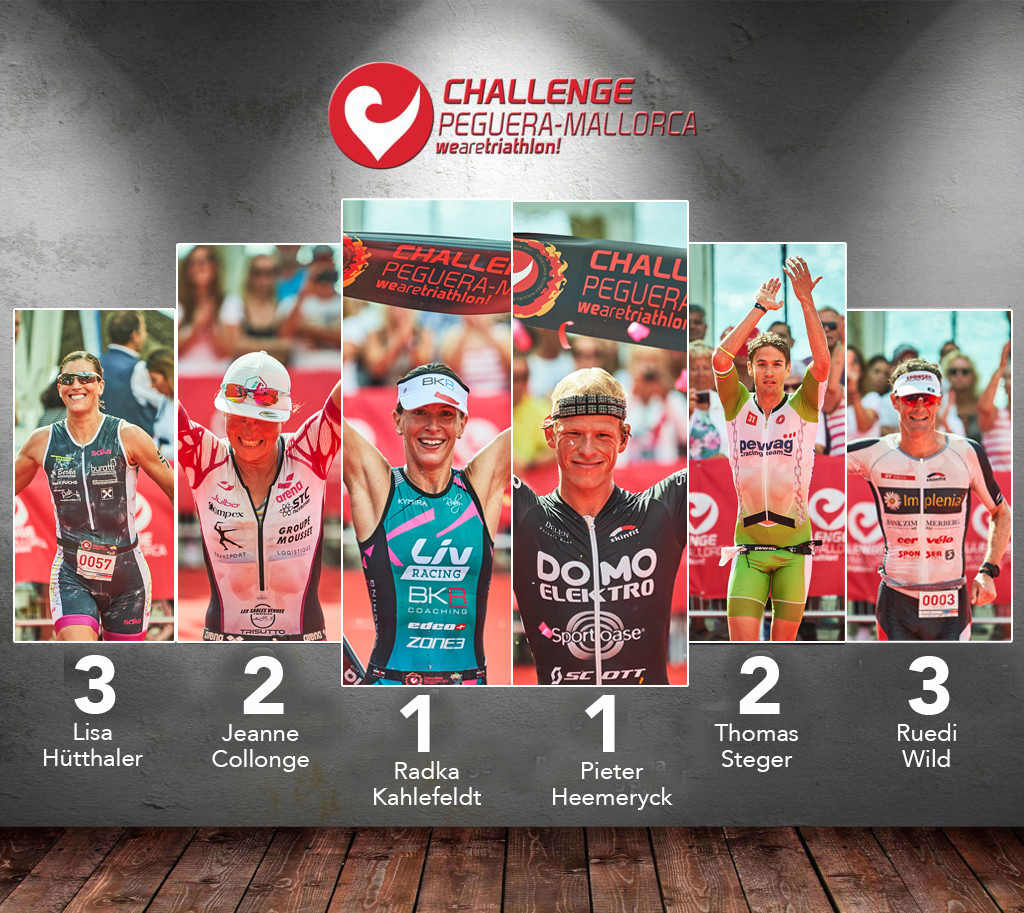 Incredible victories of Pieter Heemeryck and  Radka Kahlefeldt at the sixth edition of Challenge Peguera Mallorca, on a day full of triathlon in the superb setting of Calvia. A sunny day dawned in Peguera, with the weather becoming once more an ally for a magnificent event, converging in an epic and visual race. The sea, totally in calm was perfect to enjoy a great triathlon day. 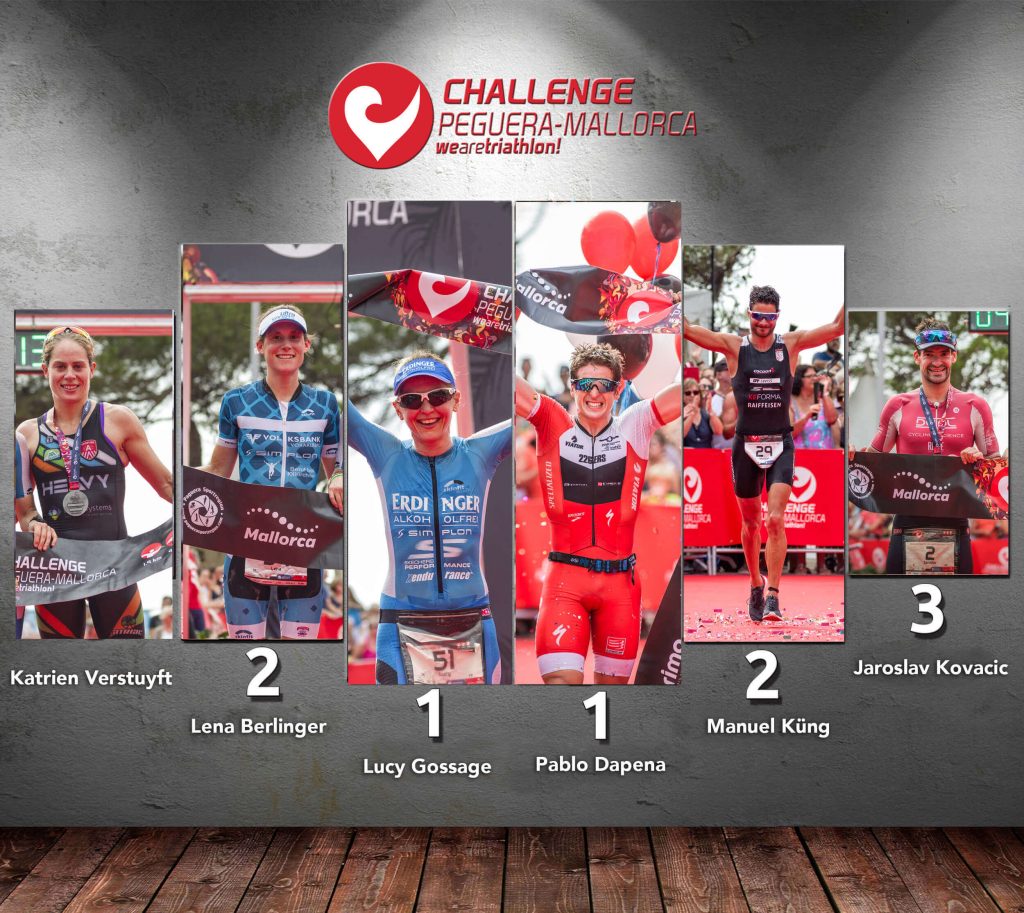 Incredible victories of the spanish Pablo DAPENA and the british Lucy GOSSAGE at the fifth edition of Challenge Peguera Mallorca, on a day full of triathlon in the superb setting of Calvia. A sunny day dawned in Peguera, with the weather becoming once more an ally for a magnificent event, converging in an epic and visual race. The sea, totally in calm was perfect to enjoy a great triathlon day.

Spanish Pablo Dapena took the win in 03:54:08 after an incredible performance, beating Manuel Küng, who was second, and Jaroslav Kovacic, who ended third. The women’s victory was for Lucy Gossage. She finished after 04:26:57 with a big lead on her runner-ups, Lena Berlinger and Katrien Verstuyft. 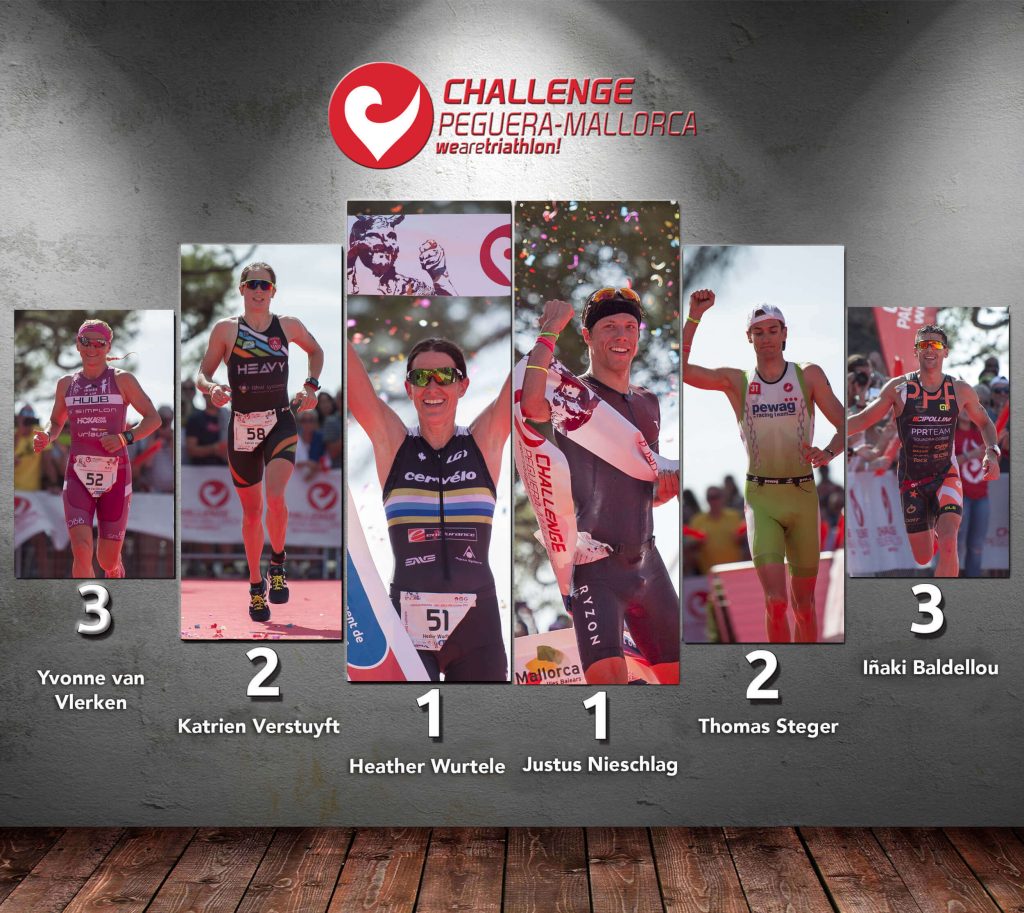 Press note 2017. Justus and Heather crown the fourth edition of Challenge Paguera-Mallorca
A spectacular climate with a radiant sun and a calm bay of Peguera received the 1.000 participants in the main test of Challenge Penetration 2017, the middle distance triathlon.

In the male category, German Justus Nieschlag He gave a master class in triathlon, with a perfect race in which he dominated all segments with a wide advantage. The Austrian finished the podium Thomas Steger(2ª position) and Spanish Iñaki Baldellou (3º).

In the female category, Heather Wurtele He won the Challenge Peguera Mallorca victory. After a swim dominated by the German Anja Knapp, the Spanish Marta Sanchez and the British Fenella Langridge, Wurtele took the lead in the first kilometers of the circuit and did not leave that position. Its advantage was growing kilometer by kilometer and only the good pace of the Belgian Katrien Verstuyft and the comeback of the Dutch Yvonne Van Vlerken could worry the Canadian. Finally, the half marathon decided and a smiling Heather Wurtele crossed the finish line with a time of 4: 24: 42, followed in second position ofKatrien Verstuyft and Yvonne Van Vlerken 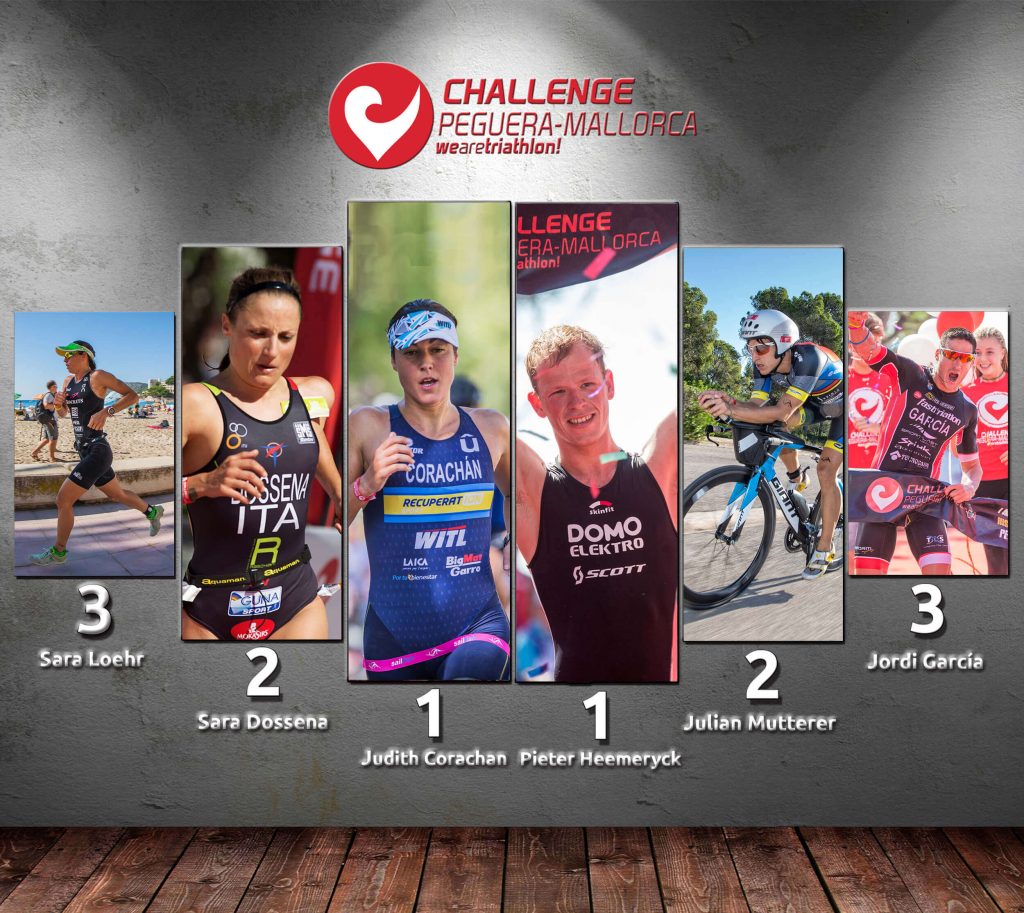 Pieter Heemeryck and Judith Corachan reign in an incredible third edition of Challenge Peguera Mallorca 2016
Incredible victories from Belgium’s Pieter Heemeryck and Spain’s Judith Corachán in the third edition of the Challenge Peguera Mallorca 2016, on a day full of triathlon in the superb setting of Calvia.

A sunny day dawned in Peguera, with the weather becoming once more an ally for a magnificent event, converging in an epic and visual race. The sea, after a week of fluctuating weather conditions, left a wavy sea which m.ade for a more complex swim segment.

In the men’s race Jordi García Gracia was first out of the water, in a group with Belgium’s Pieter Heemeryck, David Bishop (UK) and Henry Beck (GER).

The run took place entirely in the central area of Peguera, distributed over four laps that went along the town’s boulevard with the promenade uniting the beaches of Palmira, Tora and Romana, with stunning views of the Mediterranean Sea.

During the 90 km bike sector, Belgian’s Heemeryck dominated a technically demanding and sinuous segment that combined coast, mountain, natural landscapes at the foot of the Serra de Tramuntana (UNESCO World Heritage), through traditional villages such as Capdellà, Calvià and some of the best known resorts in Europe such as Santa Ponça or Peguera, along with Toro.

The run course would prove decisive, with an unrivalled Heemeryck, the rest of the podium places still had to be determined. An incredible comeback clinched Julian Mutterer (GER) second place, while the third position went to Spain’s Jordi García Gracia, after yet another unbelievable run segment.

Britain’s Catherine Jameson and Judith Corachan sustained an impressive contest throughout the first two segments, virtually finishing the swim course together and retaining a slight difference during the main part of the race, with Uk’s Nicole Walters following behind them in third spot.

Coming into the final race segment, Catherine Jameson was unable to uphold Judith, who continued to maintain a very high pace that ultimately earned her the final victory. Italy’s Sara Dossena, rallied positions on the run leaving T2 in in seventh place to finally finish in second position.

Lastly, the 2015 Challenge Peguera champion, Sara Loehr, kept her fourth position from off the bike, and in an incredible final course completed the podium in third position.

Challenge Peguera Mallorca concludes with great success and offering a high quality sporting event. This success, based on community support and the volunteers, consolidates the race as the most important deseasonalization sporting event for Calvia. 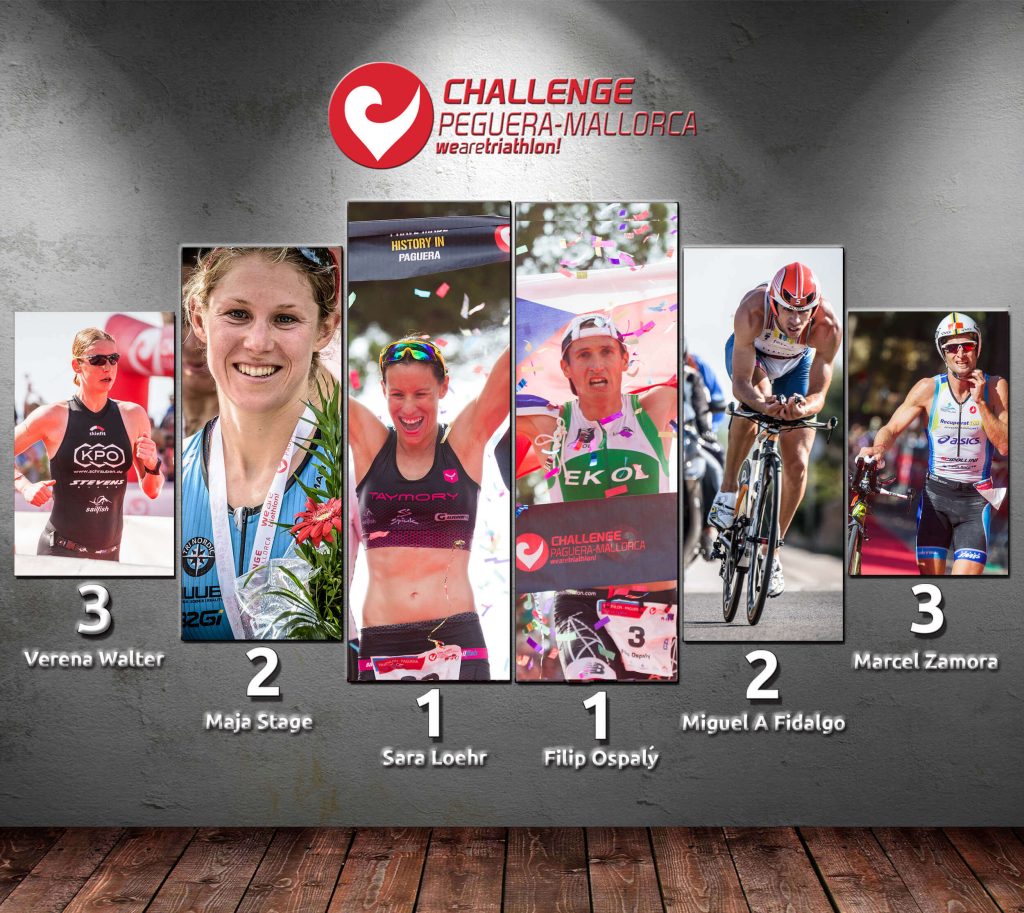 A stunning day dawned in Paguera, demonstrating once again that the Mallorcan climate is unique and can enjoy outdoor sports all year around. With a calm blue sea and striking sunrise the hundreds of age group athletes joined the strong pro field Torà Beach to start the second edition of Half Challenge Mallorca Paguera.

A large crowd gathered throughout the day in Paguera hoping to enjoy a race with some of the best triathletes in Europe, including ITU star Mario Mola, (ESP) world championship runner-up, as well as the last two European mid distance champions, Giulio Molinari (UTA) (2014) and Filip Ospaly (2015). Moreover, a large representation of international age groups of international and local triathletes contributed to give color to the event.

In the men’s race, rookie Mario Mola was the first to complete the 1.9 km swim from Tora Beach in 24:03, followed closely by Pieter Heemeryck (BEL), Ospaly and Molinari.

Into the 90 km bike leg and Molinari and Mola led the competition setting a fast pace in an intense duel. The technically demanding course combined coast, mountain landscapes at the foot of the Serra de Tramuntana (UNESCO’s World Heritage Area), running through traditional villages such as Capdellà, and some of the most famous resorts in Europe: Palmanova, Magaluf, El Toro an Santa Ponsa.

At the 70km mark, an untimely puncture while in second place meant local hero Mola was out of the competition. An unfortunate outcome for his debut in the middle distance. However, the two time runner-up, left with a good feeling on his immersion over this distance.

The run took place entirely in the heart of Paguera, over four laps that crossed the town’s boulevard along the promenade that joins the beaches of Palmira, Torà and Romana, with stunning views of the Mediterranean Sea.

The the first few km fo the run saw Molinari continuing his lead. However, he paid the price for his efforts on the bike and was taken over by Ospaly by the 8km mark and stormed to victory with a 1:17 run split in an overall time of 4:03:26. Behind him, Zamora and Fidalgo battled for second in third and in the end, local Mallorcan Fildago took second in 4:03:44 while Zamora claimed third in  4:04:29.

In the women’s race, Catherine Jameson (GBR) led much of the race, exiting the water first in 25:08 and distancing herself from the rest of her adversaries during the bike leg, securing a five minute lead coming into T2. Verena Walter (DEU) was behind her in second while Loehr and Dolça Ollè (ESP) battled for third, the former having a strong hometown advantage.

Jameson continued to dominate during the first third of the run but by the 7km mark had slipped to second wih Spanish Middle Distance Champion, Loehr taking the lead and maintaining it until her victory in 4:37:00.

Behind her, the Danish Maja Stage Nielsen (DEN) ran up from 10th to second while Walter fought to the end throughout the race, overcoming problems with her bike, to finally gain the bronze medal. 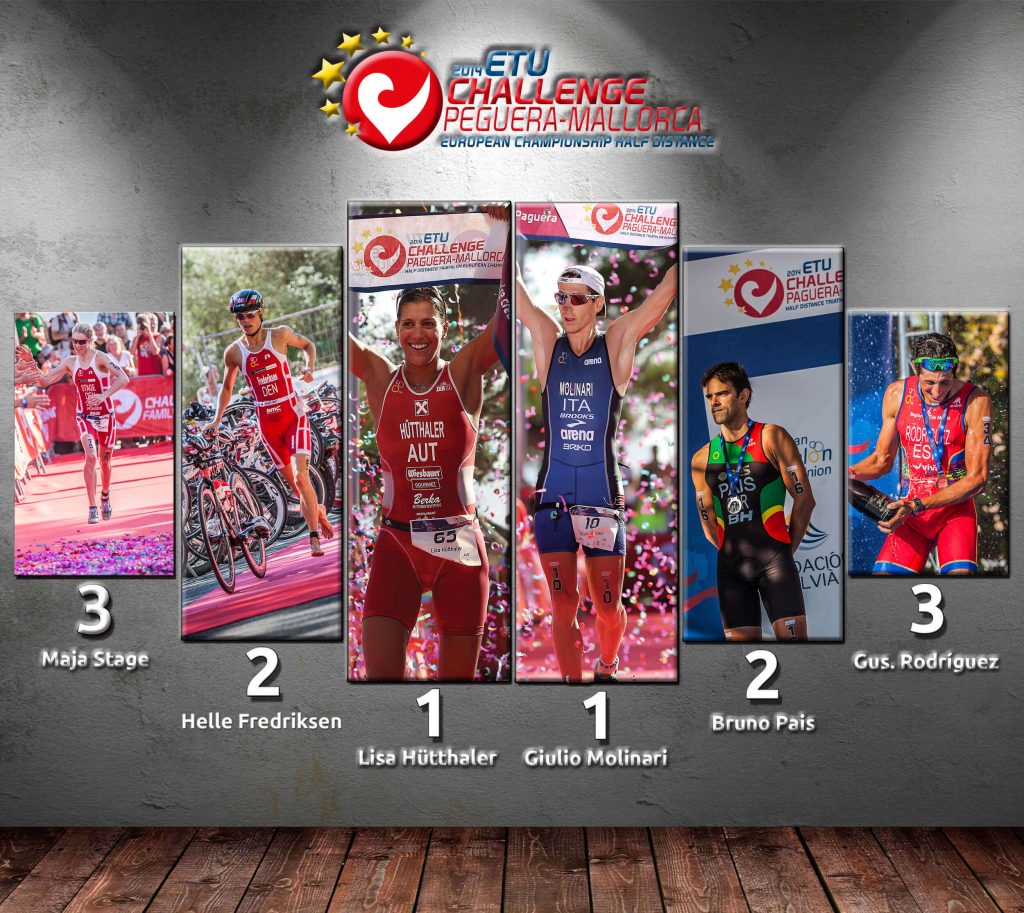 Press note 10/18/2014. Molinari and Hütthaler crown the first edition of Challenge Paguera-Mallorca
This Saturday 18th October, Paguera welcomed the first edition of the Challenge Paguera-Mallorca, an spectacular event that crowned Giulio Molinari and Lisa Hütthaler, earning both of them the elite’s Half Distance Triathlon European Championships titles. Two victories forged in the vicinity of the magical places that surround the town of Calvià, filling with color and excitement a splendorous day of some of the best triathlon.
Elite, Paratriathlon, Age Groups and Open races all gathered an impressive start line in an event that took place in an unforgettable setting. The elite men’s competition was in charge of opening the event, with the start set at Tora beach, with magnificent temperatures. After completing the 1,9 km swim segment,the exit was set at the nearby Romana beach leading the way to the first transition zone.

Thereafter began the spectacular cycling course. A total of 91 km of a very technical and sinuous sector that brought together all the essential elements that make this a remarkable and embracing area: coast, mountains, outstanding natural landscapes at the foot of the Serra de Tramuntana (Heritage of UNESCO), cycling through traditional villages as Es Capdellà and some of the best known European resorts as the likes of Palmanova, Magaluf, El Toro or Santa Ponsa.

Italy’s Molinari came through T2 leading the race with the final 21km of the running segment left. The course took place around Paguera’s central avenues. Molinary was the first to cross the finish line with five minute lead, and thus obtained the continental title, as well as becoming the first winner of this successful first edition of Challenge Mallorca Paguera.

The second place went to Portugal’s Bruno Pais, while an impressive Gustavo Rodriguez won the bronze medal after a remarkable comeback during the cycling segment.

In the women’s race,Rahel Kueng and Helle Frederiksen where the first two triathletes out of the water. Frederiksen was the fastest one in the transition area to head out at the front at the start of cycling sector.

After completing the bike segment, during the running course Hütthaler Lisa Frederiksen maintained a tough rival throughout the initial moments of this final segment. Finally, the Austrian triathlete managed to outshine Frederiksen and clinch the victory. Frederiksen came in second place. While fellow teammate, Maja Stage Nielsen, completed the podium in third position. 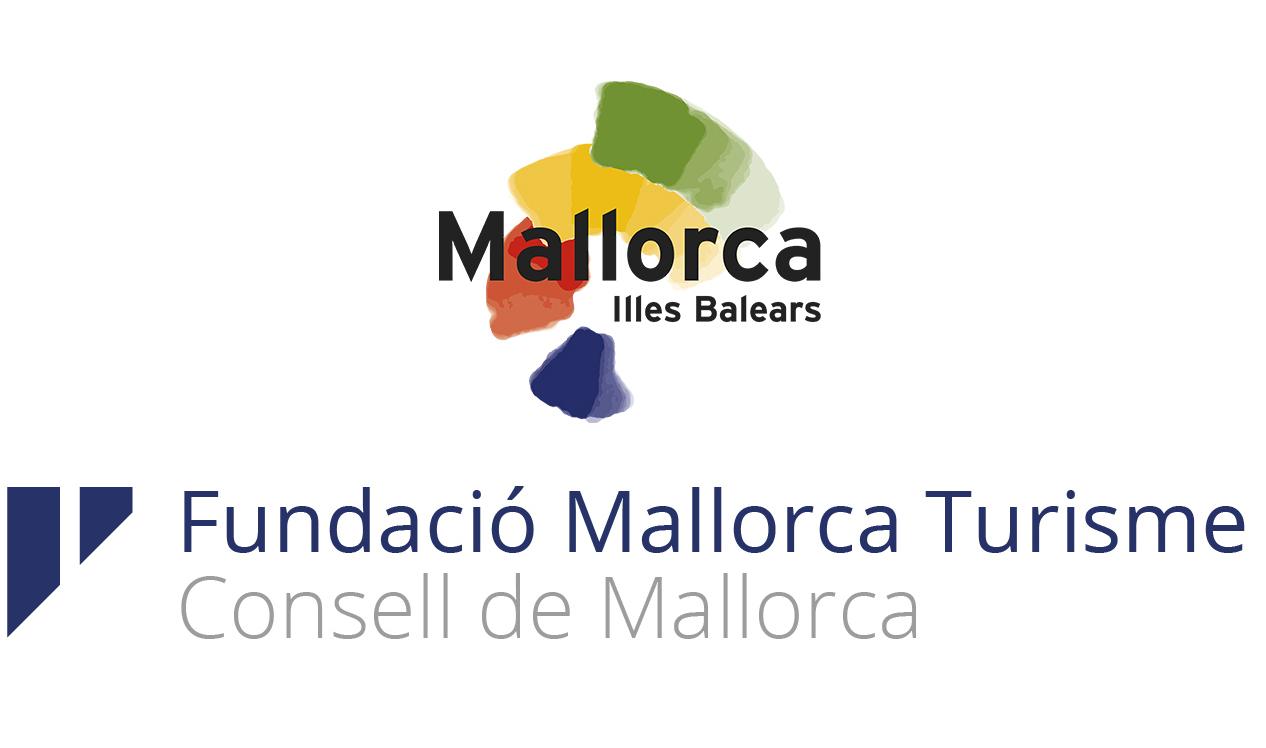 🚵‍♀️ THE WEEKEND IS FOR TRAINING! 🚵

ONLY 8 MONTHS TO GO until CHALLENGE PEGUERA MALLOR

Don't let anyone tell you you can't do it 🙌

SWIMMING is a complete sport which makes both ment

Do these views ring a bell? Have you seen them dur

To achieve your dreams, you must work until Monday

🏃THE WEEKEND IS FOR TRAINING 🏃‍♀️

Some cyclists use their bikes constantly, and this